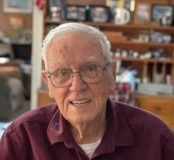 Eugene W. Tucker, having recently celebrated his 95th birthday on June 23rd, passed away peacefully at his home of 65 years, with his children by his side, on Friday, July 29th, 2022. He was preceded in death by his wife, Myrna Tomys Tucker and a son, Christopher Kent Tucker. Memories of Eugene are celebrated and kept close by his surviving family who include his children, Virginia Julian (Kevin) of VA, Daniel Tucker (Lori) of NC, Cynthia Tucker of Goshen, Patricia Barron (Jeff) of VA, Katheryn Mottle (Alan) of PA, and Timothy Tucker (Susan) of the Hamlet of Wallkill. Eugene was blessed with 17 grandchildren, 26 great-grandchildren and one on the way, ranging in age from 10 years to 1 month, along with 3 nieces, a nephew and a very special cousin, Jack Tucker and his wife, Louise. Buddy, an Australian Cattle Dog, age 13, is at a loss without his owner and best treat giver! Born and raised in Mt. Vernon, NY to Wilbur H. and Grace V (Dawson), he was an only child. He grew up with a huge pool in his backyard because his father was the resident manager of Willson Woods, a Westchester County Park. He learned to swim, dive and fish at an early age, skills which served him and his family well through his life. While in high school he was a volunteer Messenger for the Council of Defense of the City of Mt. Vernon, NY. Enlisting in the Navy at 17, during his final month of high school, he served on the USS Alcor and USS Chicago, as a Seaman 1st Class, receiving the Asiatic Pacific Medal, America Theater Medal, and Victoria Medal, and was honorably discharged in July of 1946. After his military service, he attended Arnold College (now Bridgeport University) as a physical education major. He earned his Masters in Arts Degree in Elementary Education from NYU in 1951. He began his 36 year teaching career at Mayflower School in New Rochelle, NY as a fifth grade teacher. He met the love of his life, Myrna, on a blind date in 1952, married in 1953 and his family began to grow in 1954. After teaching for 6 years in New Rochelle, a move to Goshen, NY "for a pleasant community in which to work and raise my family" was in order. Retiring after another 30 years of teaching, mostly 6th grade science and indelibly stamping the word "Mensch" on their brains along with the phrase "I will do as I am told, when I am told ………" written often by students who "didn't", Eugene settled into keeping track of his ever expanding family, fishing, reading, making woodworking crafts for the kids, bird watching from the breakfast table, walking with his dog and enjoying an ice-cream from Trail Side Treats. An avid Dallas Cowboys fan, he'd often bet a WHOLE dollar on a game, especially against the Giants and later in life he enjoyed watching the Yankees with his daughter Cindy, as often as they played, paying special attention to Aaron Judge. Eugene did a variety of part-time jobs throughout his working life. Some of these were as a lifeguard, taxi-driver, bowling pin setter, Playland Policeman, bus driver, Goshen Recreation Swim Program Director, taught Adult Ed at BOCES, and managing the Goshen Movie Theater. He volunteered as a Scoutmaster and Village of Goshen Game Warden. The family would like to thank Good Sam Home Health, the Veterans Administration and HOSPICE for their tender, loving care and support during the past few weeks. Our Dad appreciated all you did and we liked how he perked up when you came. The memorial service will be held at 11:00 am on Friday, August 5th, 2022 at the First Presbyterian Church, 33 Park Pl., Goshen, NY with his grandson, Kevin Julian II officiating. Interment will be in the Memorial Columbarium on the Church grounds immediately following the Service along with a Celebration of Life Gathering in the Fellowship Hall. In lieu of flowers, Eugene would like memorial contributions to either St Jude's Children's Research Hospital at Memorial Giving, 5HO01 St. Jude Place, Memphis, TN 38015 or on their website at stjude.org or HOSPICE of Orange and Sullivan Counties, Inc., 800 Stony Brook Court, Newburgh, NY 12550 or at www.hospiceoforange.com Arrangements under the care of Donovan Funeral Home, Inc. To leave a condolence online please visit www.donovanfunerals.com.