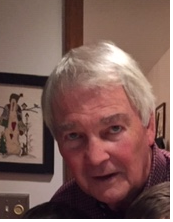 Richard Clinton Durland of Campbell Hall passed away peacefully at home surrounded by his loved ones on June 29, 2020. He was 76 years old. He was born in Troy, New York to Harold and Rhyle Phillips Durland on October 21, 1943. He was married to the love of his life Maria M Pennings of Goshen on May 31, 1975. They shared 45 wonderful years together. He was a 1961 graduate of Middletown High School and a 1965 graduate of Northern Arizona University in Flagstaff, Arizona. Dick served in the US Army from May 1968 to May 1970. He was stationed in Okinawa during the Vietnam war. In October 2019 he had the privilege of being part of the Honor Flight to Washington DC along with his brother Phil and his two sons Kevin and Eric and his nephew Kyle. After serving in the army he started working at the Goshen Savings Bank and worked there for 29 years, retiring as Vice President. After his retirement he worked for Provident Bank and the Bank Of America. He also loved his job as courier for the Horizon Medical Group. Being a real "people person" he made it his mission to remember the names of all the girls who worked in the many Horizon offices. Since 1984 he enjoyed being an active member of the Goshen Rotary Club. He also served as treasurer for the Goshen Humane Society and the Goshen Little League. He love to read, travel and watch travel shows on television. He also was an avid sports fan. Dick was known for his great smile and quick wit. He was a friend to many and enemy to none. He is survived by his wife Maria at home and two sons Kevin and his wife Catherine of Lagrangeville and his son Eric and his wife Caitlyn of Campbell Hall. His two grandsons Brady and Rhyle and his newborn granddaughter Evelyn Marie will miss their grandpa affectionately known as "Bumpy". He is survived by his brother Phillip and his wife Joyce of Chester and their children Kelly and Mike Ferrante of Chester and Kyle and Melissa Durland of Goshen. He's also survived by his in-laws Margaret Hawkins of Florida NY, Anthony and Yoshie Pennings of Austin, Texas and Dr. Nicholas and Carol Pennings of Raleigh, North Carolina. Uncle Dick will be missed by his many nieces and nephews. The Family wishes to thank Dr. Jeff Stewart and his amazing staff for their kind and compassionate care. Thanks also to Lorna, Melanie and Shenay of Hospice of Orange and Sullivan County. As well as his tireless caregivers Margie Hawkins and Betty Ann Van Leeuwen. Private family services were held on July 1 and burial was in St. John's Cemetery, Goshen, New York. In lieu of flowers donations may be made to Braeside Camp % the Rotary Club of Goshen PO Box 563, Goshen, NY, Goshen Humane Society, PO Box 37, Goshen, NY, Hospice of Orange and Sullivan County - www.hospiceoforange.com, Michael J Fox foundation for Parkinson's Disease - michaeljfox.org.
Tuesday
30
June