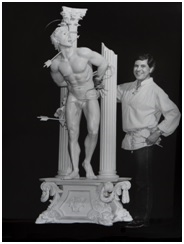 Please share a memory of Nino to include in a keepsake book for family and friends.
View Tribute Book
Nino Novellino, President of Costume Armour, resident of Goshen, New York passed away on June 11, 2021 from complications with Myasthenia Gravis. Nino came into this world on June 25, 1940 and grew up in Glen Rock, New Jersey. His unique talent for art was discovered early and he graduated with honors from Pratt Institute in New York. After marrying the love of his life, Mary, he started working for Feller Scenery and Costume Armour in New York. Nino and Mary lived in Manhattan until 1976 when they bought a beautiful Victorian house in Goshen, NY. Nino and Mary also bought Costume Armour from their bosses Peter and Katie Feller the same year. They worked side by side for years and turned Costume Armour into a thriving theatrical company. Unfortunately, Nino lost Mary to an aneurysm almost thirty years ago, but with the help of his devoted staff, Costume Armour continued to thrive for 50 years. Nino was often referred to as the Michelangelo of Broadway. His sculptures, props and set pieces appeared on hundreds of Broadway stages from Man of La Mancha to Phantom of the Opera. New York City Ballet, American Ballet Theater, The Royal Ballet, San Francisco Ballet and the Martha Graham Dance Company as well as The Metropolitan Opera and New York City Opera were enhanced by his talents. He helped to jazz up the stages of Las Vegas and added to the enchantment to all four of the Disney Theme Parks as well as Universal Studios. Even Ringling Brothers Barnum and Bailey Circus, The Big Apple Circus and Radio City Music Hall were touched by Nino and Costume Armour. Film and television were also graced by his artwork. In 2004 he received The Irene Sharaff Lifetime Achievement Award for his sculpture in the theater. He was generous to a fault….if he had it, he would give it to someone. He was always thinking of the "other person" first. He was handsome, distinguished and always the perfect gentleman. You rarely came upon him when he wasn't wearing a tie. He was funny and sarcastic….clever and smart. His smile could light up room. Many of us can't imagine life without Nino. He was loved and admired, not only for his artistic talent but for himself. They broke the mold when he came into this world. He is survived by his sisters Rosemary Novellino-Mearns, Tina Novellino and brother-in-law Bill Mearns all of New York City. Visitation will be Thursday, June 17 from 4:00 to 7:00 PM at Donovan Funeral Home, Inc, 82 South Church Street, Goshen, NY. Family is requesting that masks be worn by everyone that will be attending the visitation at the funeral home. A Mass of Christian burial to Celebrate his life will be held 10:00 am on Friday, June 18, 2021 at St. John The Evangelist RC Church, 71 Murray Ave, Goshen, NY. Burial will follow in St John's Cemetery, Goshen. Arrangements under the care of Donovan Funeral Home Inc. To leave a condolence online please visit www.donovanfunerals.com.
Thursday
17
June

Share Your Memory of
Nino
Upload Your Memory View All Memories
Be the first to upload a memory!
Share A Memory
Send Flowers
Plant a Tree