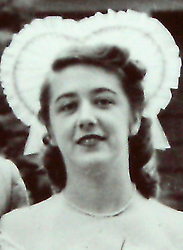 Theresa L. Galipeau, 95, entered into rest peacefully August 3, 2020 at home in Glen Arden. Theresa, (Terry) was born in Pawtucket, RI on October 22, 1924 and was the third daughter of Robert J. Levesque and Delisca Chaput. Theresa graduated from St John s Academy for girls in Pawtucket RI. She worked as a secretary at Owens-Corning Fiberglas during World War II, then at the Brown University Library. She married Arthur H Galipeau in 1946. While her husband finished his degree after the war at the University of Rhode Island, she served as secretary to the Dean of Men at the university. She started to gather credits for her own college degree at this time. Her husband's career took them to Several towns in NJ. While they were in Moorestown, NJ Terry took the opportunity to finish her college degree from Rutgers, Camden and at the age of 48 received her BA in English literature in 1976. Her husband s career ended in Secaucus NJ where Art became the Executive Director of the Telephone Pioneers of America's. She contributed to the partner-oriented organization by giving motivational speeches about the history and birth of the telephone company. She and her husband retired to Boynton Beach, Florida in 1989 and lived for 16 joyful golfing years. They moved to Goshen to Glen Arden in 2004. . She is survived by her children, Steven A. Galipeau, and his wife Linda of West Hills, Ca; Dr David W Galipeau, and his wife Patricia of Brookings, South Dakota; Kenneth J Galipeau, and his partner Judith Hagan of Hackettstown NJ; and Julie A Lees and her husband William I Lees Jr of Estero, Florida. She is also survived by 9 grandsons and 3 granddaughters, as well as many great grandchildren. She was predeceased by her Husband Arthur H Galipeau, and her 2 beloved sisters, Violet Weinacht and Yvonne Rehmke. The family would like to thank all the people through the years that have cared for their mother, especially the beloved Tanya Campbell who is the family's angel. Additional thanks to all the workers at Glen Arden Healthcare Center who made mom's last few months comfortable and special during these difficult times. A Memorial Mass will be held privately at the convenience of the family at St. Columba RC Church, Chester, NY Burial will also be private and held at a later date in Pawtucket RI. In lieu of flowers memorial donations may be made to Rutgers University, Camden Campus, Theresa's Alma Mater. Arrangement under the care of Donovan Funeral Home Inc. To leave a condolence online please visit to www.donovanfunerals.com.
Services for Theresa Galipeau
There are no events scheduled. You can still show your support by planting a tree in memory of Theresa Galipeau.
Visit the Tribute Store

Share Your Memory of
Theresa
Upload Your Memory View All Memories
Be the first to upload a memory!
Share A Memory
Plant a Tree