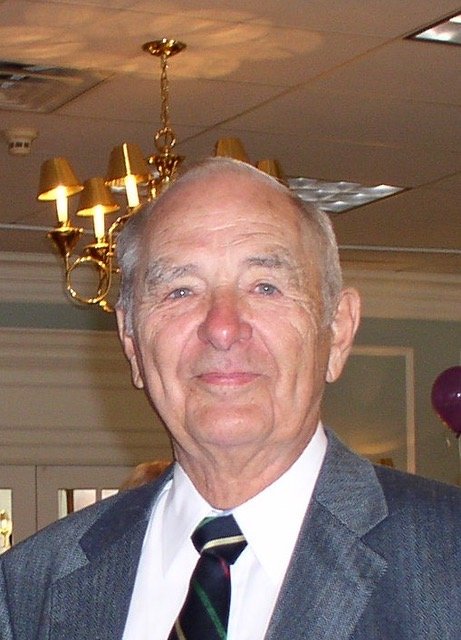 H. Leon McBride, Jr, age 93, died September 30, 2020 at Glen Arden, Goshen NY after a life filled with love, laughs and family. He was a lifetime resident of Goshen, born July 31, 1927, the son of H. Leon McBride Sr of Slate Hill NY and Charlotte Aldrich of Mamakating NY. As a child his family lived on Wisner Terrace and he later built a home and raised his family on Hilltop Drive in Goshen. At the age of 15, he attended Admiral Farragut Academy (Naval college prep school) in Toms River NJ. After graduating in 1945, he served in the Coast Guard in WWII in both the Atlantic and Pacific theaters. Following the war, he attended Fordham University and in 1950, graduated with an BS in Accounting. In 1951, he was called back to service for the Korean War and discharged in 1953 as a Lieutenant in the Coast Guard, serving as a ship’s navigator. Leon’s life changed direction when he met Elizabeth Halloran in a bar off Sarah Wells Trail now called the Horse & Silky Pub and Grill. They were married on July 11, 1954, and made a home for over 60 years on Hilltop Drive, raising 6 children. Of all things, Leon loved his family most. Many treasured vacations with the Airstream, five boys, a girl and a wife, long before Tiny Living was even a thing. Leon also had a strong passion for downhill skiing, they say he started on wooden boards before skis were mass produced. Winter vacations were spent with family and friends in Stowe Vermont, where the mountains were covered with Goshen families. He never stopped the drive to continue learning, taking lessons to improve his downhill turns on the slopes or his swing on a golf course. He always wanted the best for his children and he was proud to be able to support all six kids through college. The true love of his life was his wife Betty, who brought joy and laughter to all life’s events. Leon and Betty spent many years of their retirement living on a golf course in Ft. Peirce Florida where they had a great group of friends to swing clubs with or to share stories. Leon also enjoyed the outdoors, hunting, fishing, hiking, camping, skiing and golf. Many remember Leon as Goshen’s Troop 66 Boy Scout Master for over many many years, so many years we lost count. More recently his family, friends and relatives will always cherish the Annual 4th of July party at their Hilltop Drive home which always ended with sleepy grandchildren in lawn chairs waiting for the next Big Boom. For over 35 years he owned and managed McBride Transportation and Home Fuel on West Main Street in Goshen employing hundreds of Orange County residents over the years. He is survived by his wife of 65 years Elizabeth (Betty); their six children; Shawn of Goshen NY, Kean of Raleigh NC, Terry of Allen TX, Michael of NY NY, Patrick of Charlotte NC and Maureen Ellsworth of Newburyport MA, 16 grandchildren and 7 great grandchildren. Leon was a man of integrity and honor and was always there for a hug, a laugh and a story. He will be dearly missed by his family and all that knew him. At this time no services are scheduled until some critical travel and quarantine restrictions are lifted to allow family members to travel. More information will be provided when available.
Services for H. Leon McBride, Jr
There are no events scheduled. You can still show your support by planting a tree in memory of H. Leon McBride, Jr.
Visit the Tribute Store
Plant a Tree
Print
Share A Memory
Plant a Tree