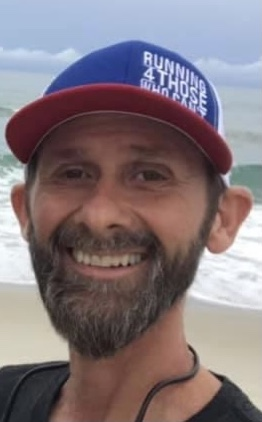 Please share a memory of Shane to include in a keepsake book for family and friends.
View Tribute Book
Shane Michael Miles, 48 (formerly of Middletown NY) passed away at his home on March 3, 2020 in Manteo, North Carolina, after a courageous battle with cancer surrounded by his loving family. Shane was born on March 10, 1971 in Middletown, New York to Kathleen McMahon Wronka & Louis Miles. Shane graduated from Middletown HS and soon thereafter moved to the Outer Banks to pursue a better life for his family. Shane worked in the restaurant business and soon cultivated his love for food and the culinary arts. Shane lived life to the fullest celebrating with his family at backyard pool parties and family vacations. His family and friends were his number one priority in life. Shane beat his first battle with Cancer in 2009. After this his good friend introduced him to the life of running, and soon after running became a great passion for him in the last decade of his life. Through his many accomplishments of ultra-marathons, involvement in the Outer Banks Running Club, and his ownership of a local runner's shop, Roanoke Island Running Company, for several years. Shane has inspired and encouraged many to go after their passions whether through running or other paths. His desire to help others fighting the fight sparked a community involvement that would never waver until his last days. In January 2019, Shane took his diagnosis of Stage IV Colon Cancer with strength and courage. He battled this year vigorously with the support of his loving Heather by his side as well as many friends and family. He never wavered and consistently pushed himself, most notably running the Marine Corps Marathon in October 2019. As the battle ramped up Shane saw his community of family and friends rally behind him. Even in the end Shane continued his fight with dignity, this is not a battle lost but another race finished for Shane Miles as he now runs In Paradise As a well-admired member of the community, Shane leaves behind his daughter Shyanne Gomez, and son-in-law Joseph Gomez, his son Ethan Miles, his partner in life and love Heather Gardiner, his mother Kathleen Wronka and her partner Greg Casillas, his father Louis Miles, his three siblings Imogene Russell, Maggie Miles, and Jason Wronka, his loving Aunts & Uncles Patricia & John Greenhill, Irene & Phillip Aldrete, Michael McMahon, Charlotte & John Walston, His Godmother & husband Helen & Dennis Hamilton, nieces Josslyn & Julia Wronka, nephew Teddy Russell, cousins who were like siblings- Sharon Frey, Johnny Greenhill, Zak McMahon & Bobby Aldrette, and a host of loving friends and his running community. Shane was predeceased by his extremely loving grandparents Mickey & Dixie McMahon and Ben & Julie Miles. Shane was the first grandchild for both sets of grandparents and he held a very special place in their hearts., A celebration of Shane's life will be held on Sunday July 18, 2021 at the home of his cousin Sharon Frey. Please feel free to stop by and share your memories with his family between 1:00 & 4:00 at 20 Prospect Ave. Goshen. The family would like to thank all who reached out during Shane's illness. We thank you for your continued support and generosity of donations that helped to cover his medical expenses.
Sunday
18
July

Share Your Memory of
Shane
Upload Your Memory View All Memories
Be the first to upload a memory!
Share A Memory
Plant a Tree