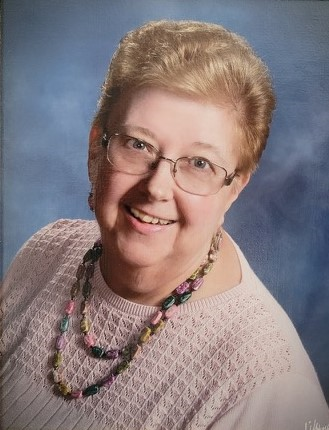 Please share a memory of Joan to include in a keepsake book for family and friends.
View Tribute Book
Joan T. Howell, age 82, of Goshen entered into rest Saturday, August 27, 2022, at home in Goshen with her children by her side. Joan was born August 21, 1940, in Goshen, NY. She is the daughter of the late Charles G. and the late Pauline (Hoffman) Thew. She married Dewitt "Garry" Garrett Howell in Campbell Hall on June 13, 1964. After graduating from Orange County Community College, she was a stay-at-home mother to her two girls. Joan then went to work for the Goshen Central School District, Goshen, NY, where she retired as a Guidance Secretary in 2004. Joan was a not only a member, but also a past Deacon, Elder, and Sunday School Teacher of the First Presbyterian Church in Goshen. She was also Girl Scout Co-leader and 4 H Co-leader with her late-husband Garry, and Past Matron of the Ajamore Chapter of the Order of the Eastern Star. Joan loved spending the summers camping with her family at Alpine Lake, annual trips to Ocean City, NJ, and game days with family and friends. Joan had a life-long love of reading and could always recommend a good book. She loved studying the bible, spending time with friends, and had a passion for crocheting and knitting for charity organizations as well as family and friends. Joan is survived by her daughters, Susan Ambrosino and her partner Douglas Riechel of Eldred, NY and Diane Randall and her husband Graham of West Palm Beach, FL; brother Gordon Thew and wife Laurie of Maybrook; sister-in-law Linda Dross of Goshen; two grandchildren Raymond Curry of Myrtle Beach, SC and Alysha Ambrosino of Eldred, NY; and several nieces and nephews. Joan was predeceased by her husband Dewitt "Garry" Garrett Howell. A funeral service to celebrate her life will be held at 11:00 am on Friday, September 2, 2022, at the First Presbyterian Church, 33 Park Place, Goshen, NY. In lieu of flowers, memorial donations may be made in Joan's name to Hospice of Orange and Sullivan County, 800 Stony Brook Ct, Newburgh, NY 12550 and the First Presbyterian Church, 33 Park Place, Goshen, NY 10924.

Share Your Memory of
Joan
Upload Your Memory View All Memories
Be the first to upload a memory!
Share A Memory