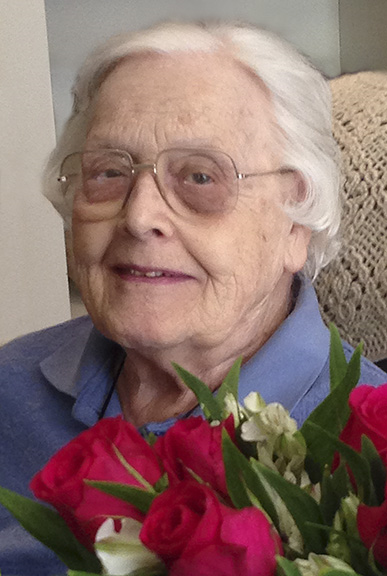 Please share a memory of Sarah to include in a keepsake book for family and friends.
View Tribute Book
SARAH SMYTHE BONNEN October 13, 1925 - June 6, 2022 Sarah Smythe Bonnen joined her husband, James Thomas Bonnen, her parents, the Reverend Edwin Smythe and Kathryne Batchelder Smythe, and her two sisters, Kathryne Hansen and Ann Smythe, in the afterlife. Sarah is survived by her children: Edwin Bonnen (Kim Kauffman), Alice Bonnen (Richard Glick), Clarence Bonnen (Susan), Charles Bonnen (Patricia), and John Bonnen (Cynthia), her grandchildren Kathryn, Lucy, Lily, Alexander, Benjamin, Sarah, Paul, Sophia, Joseph, and Thomas, and her great-granddaughter, Eloise. Her family will miss her dearly, remembering all she did for us during life, recalling rich memories. Sarah lived a full and fruitful life, one in service to her family and community. Her lifelong love of music and, in particular, opera grew through her father, the St. James Episcopal Minister and choir director, who taught her to play piano. This upbringing created a deeply spiritual woman who could readily quote the Bible and play her favorite hymns. She was witty and a quick study entering the University of Michigan at 16 years of age. She attended Bryn Mawr obtaining a Masters in German with Honors in French She was a Phi Beta Kappa member. She taught German at Lawrence College until she was old enough at 21 to be recruited into the OSS (CIA precursor) as a translator for the U.S. Military, in Berlin, in 1947. She evacuated at the beginning of the Berlin Airlift and returned to the States to work on a Ph.D. in German literature (Schiller) at Harvard. She met Jim, her husband to be, in the stacks of Widener Library, when they were introduced by a mutual friend. They were married in 1954 and moved to East Lansing in 1955 and began a family. Raising five children was a full-time job. Sarah cared for her family's physical needs in many ways. She was a great cook, a superb tailor making suits for her husband and boys as well as dresses for her daughter. She enjoyed knitting and crocheting. Sarah was intellectually nurturing—encouraging the reading of classic literature, and reviewing and editing innumerable academic papers for both her husband and children. She served on Cristo Rey Community Center's Board of Directors and taught English as a second language. Sarah and Jim were married for 58 years until his death in 2013. Sarah and Jim will be buried together in St. James Cemetery in Goshen, NY next to Sarah's parents. Memorial service: St. James Episcopal Church 1 St James Place, Goshen, New York 11:00 am Saturday, September 24, 2022.

Look inside to read what others have shared
Family and friends are coming together online to create a special keepsake. Every memory left on the online obituary will be automatically included in this book.
View Tribute Book
Services for Sarah Bonnen
There are no events scheduled. You can still show your support by planting a tree in memory of Sarah Bonnen.
Plant a tree in memory of Sarah

Share Your Memory of
Sarah
Upload Your Memory View All Memories
Be the first to upload a memory!
Share A Memory
Plant a Tree